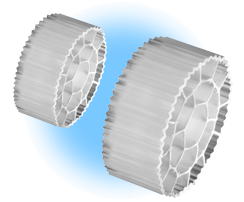 A Prawn in the Game 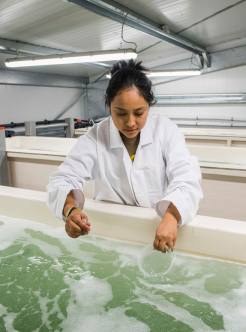 The UK’s demand for king prawns is, apparently, insatiable. Most have travelled, frozen, 6,000 miles from the Far East and Central America leaving a massive carbon footprint, but Great British Prawns is changing that. The company opened its first sustainable king prawn farm in the Scottish village of Balfron, Stirlingshire, in the summer of 2019 and is now supplying fresh prawns to hotels and restaurants within a two-hour drive of the farm.

"We know that consumers are increasingly concerned about the environmental impact of seafood production and to be sustainable”, says Chairman James McEuen, “so the future of aquaculture really has to be land-based". The farm uses the latest recirculating aquaculture system (RAS) technology, growing a million 25g king prawns in tanks containing 300m3 of water.

RAS technology requires as little as 2% of the total tank water volume per day, and this can be drawn from a borehole or even a municipal water supply, so the system can be located almost anywhere and does not need to be near the sea, river or lake. RAS provides a high level of biosecurity and environmental control, so prawn health is significantly improved. However, prawns excrete metabolites which contribute to the carbonaceous biological oxygen demand (BOD) and the ammonia concentration of the circulating water. In order to ensure healthy prawns, the BOD should be less than 3.0mg/l and ammoniacal nitrogen below 1.0 mg/l. Treating the recirculating water to remove these contaminants is crucial.

At Balfron, this is achieved by aerobic moving bed biofilm reactor (MBBR) technology, which combines the oxidation of carbonaceous BOD into carbon dioxide with nitrification to convert ammonia into nitrate. This is a fixed film activated sludge process with an established track record of over twenty five years. The biomass is attached to the surface of the Biopipe+ media which is free to move within the aeration reactor. Biopipe+ is a finned wheel shape, with a protected surface area of 500m²/m³ which provides a range of micro-environments conducive to the growth of different bacteria. This ensures efficient removal of both BOD and ammonia. The high surface area increases the overall biomass concentration, minimising the aeration tank volume, and the large openings allow for the wastewater to freely pass through the media helping to maintain a healthy and thin biofilm.

Dr Andrew Whiston, Technical Director at Great British Prawns, is no stranger to MBBR systems and media. “but Warden Biomedia provided off-the-shelf service. The media arrived on time and we obtained the expected amount of nitrification from the Biopipe+. What's even better is that they're Made in Britain members and just a few hours down the road!"